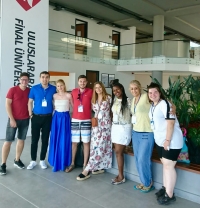 02 july, 2019
This is the topic of this year’s FIJET academy for young journalists. The training is taking place in Northern Cyprus - a place worth it discovering not only because of the Mediterranean views which reminds of paradise but also because of the unique local culture and history full of lessons for the whole humanity. Northern Cyprus is one of the most appropriate places for such topic. On its small territory there are 19 international universities. In one of them, Final International University, right now the young journalists are discussing how to improve the intercultural communication. Professors from all over the world are invited to participate in the academy. So far most of them empathize on the opportunities that touristm provides in order countries and nations to avoid conflicts. “Discovering each other’s culture gives us understanding of the other nations. And...
more 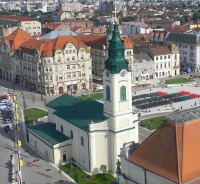 Golden Apple Award to the city of Oradea

10 june, 2019
FIJET will award Saturday, June 15th, Golden Apple to the Romanian city Oradea. The main reason to propose the City of Oradea to join the gallery of the places from all the world awarded with the Golden Apple trophy is an increasing tourist attractiveness. After years of promotion campaigns, doubled with an increasing quality of hospitality industry from Oradea, last year the number of visitors exceeded that of the inhabitants. The Golden Apple trophy will reward the municipality for its intense work and will encourage it to continue. Oradea is already a city break destination and become one of the most attractive tourist destinations in Romania. Together with the development of Baile Felix resort, located very close, it can become a tourism pole in Romania. Oradea is one of the important economic, social and cultural centers of Romania. Located about 10 km from Borș – the...
more

15 april, 2019
will take place on June 13-15, 2019, in Sofia. The Sixth News Agencies World Congress will be hosted by the Bulgarian News Agency (BTA) and will be under the motto “The Future of News”. The Congress panels will cover topics such as: “New Sources of Revenue”, “Fake News”, “Artificial Intelligence” and “Diversification” among others. The Congress will be attended by: -          Directors of over 150 leading news agencies around the world; -          Prominent journalists from the most influential media around the globe; -          Key management figures from Facebook, Google and Twitter, publishers and editors-in-chief of the New York Times, the BBC and the CNN, as well as UN Secretary...
more

26 february, 2019
Journalists from ABUJET visited Georgia with the assistance of Georgia's embassy in Sofia. They have had the pleasure to be absorbed in the atmosphere of the country which is at the crossroads of East and West on the ancient Road of the silk. The spirit of history and today can be felt in many places in Georgia.The fascination is the atmosphere in the Old city, the memorable is the visit to vine-yards of Kakheti, as well as the climbing of Coucasus mountains.The Bulgarian journalists visited Mtskheta - one of the oldest cities of Geogia; Svetitskhoveli - the Living Pillar Cathedral is known as the burial site of Christ's mantle; the Jvari Monastery - The Church of the Holy Rood.Despite a tense programme, colleagues have had enough time to experience delicious local cuisine and wine at a traditional supra﻿.
more
previous 1 2 3 4 5 6 7 8 9 next