GOLDEN APPLE TO THE CITY OF PLOVDIV 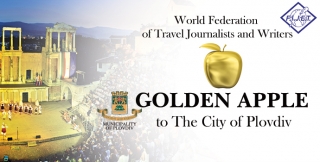 One of the most prestigious events in the tourism branch worldwide – the annual awards Golden Apple will be given by the World Federation of Travel Journalists and Writers – FIJET from 7th to 11th of September in Plovdiv. La Pomme d'Or or Golden apple which is equivalent to Oscar in the field of tourism, will be given away by the mayor of Plovdiv Ivan Totev on a ceremony at the Tsar Simeon’s Garden on September 9. The award for achievements in the field of tourism will be received by Mr. Tijani Haddad – the FIJET President and a former minister of tourism in Tunis. Mr. Maxim Minchev – President of ABUJET and Director General of the Bulgarian News Agency (BTA), Mr Plamen Starev – Secretary General of ABUJET , Chairman of the International Golden Apple Award Committee of FIJET  and Ms Nikolina Angelkova - the Minister of tourism, will be among the guests of honor.

Since 1970 the Golden Apple has been awarded to over 50 recipients, the last of which was the city of Moscow. The organizers highlight on the enormous attribution of the city of Plovdiv, mainly through the diverse cultural life in the city, the projects connected with archaeology and development of the artistic industries, as well as the proclamation of Plovdiv European Capital of Culture 2019.

Journalists from France, UK, Romania, Spain, Italy, Croatia, Turkey, Egypt, Morocco, Lebanon, Tunis and Bulgaria will be writing about Plovdiv and publish their articles in world-renowned media. One of the most popular Croatian TV Channels – Rijeka TV, will shoot and broadcast a movie about the city of Plovdiv as European Capital of Culture 2019. The city of Rijeka itself is going to be European Capital of Culture 2020.

The Tourism Team of Plovdiv, which is the main coordinator of the event, has prepared interesting and diverse program for the guests, including not only visiting the Old Town, Roman Stadium, Ancient theatre and the city museums, but also the newly-reconstructed cultural sites in Plovdiv – the Early-Christian Basilica, the Bishop’s Basilica and the House of Klianti. A coffee break at the district of artistic industries – Kapana, will be included in the program, as well as attending an event at the Ancient theatre. Throughout the four days of their stay the journalists and travel writes will get to the tourist product of Plovdiv, as well as the one of the region – the Arapovo Monastery, Asen’s Fortress, wine tours to Chateau Asena, Wine Cellar Todoroff and Ustina, as well as a folklore and classic musical programs.